COPYRIGHT LAWYERS ARE INTIMATELY FAMILIAR with the doctrine of substantial similarity, but many never copyright law's useful article doctrine. The useful article doctrine, also known as the applied art doctrine, serves as an important public policy by preventing copyright holders from obtaining a back-door longer-term patent on a functional article while side-stepping the relatively high novelty and obviousness hurdles of patent examination. To illustrate, an etching of a shoe may be copyrightable as a two-dimensional artwork depicting an athletic shoe, but the scope of copyright protection may not extend to the functional design elements of the shoe itself. The court in Eliya, Inc. v. Kohl's Dept. Stores found that the design elements depicting the shoe at issue were not sufficiently separable from the functional components of the shoe itself to warrant the relatively long-term protections of copyright and that the aesthetic of the design merged with the functional aspects of the athletic shoe"

Starting in 2007 a series of bills was introduced in Congress to grant short-term (several years) copyright protection to original fashion designs.' The reason for the introduction of these bills is that the current copyright regime does not protect apparel designs because they are considered to be functional. These bills propose to change that by carving out a fashion exception to the functionality exclusion of copyright protection.

There are appropriate and legitimate uses of copyright protection in connection with apparel. For example, an apparel company may create an original design on fabric such as a combination of branches and leaves. The company could obtain a copyright registration for this design. The design may be applied to fabric by screen printing, weaving and embroidering, Fabric generally comes in rolls and the design would be repeated throughout the roll of fabric. Copyright protection could also be used for many other ornamental features of garments, such as the design on a button or the design on the back pocket of a jean—it is the design that would be protected, not the button or the pocket.

On March 1, 2014, the States District Court for the Western District of Tennessee issued a thoughtful copyright separability decision in an apparel case involving cheerleading uniforms. Although this district is not known as a hotbed of copyright and apparel litigation, the ruling featured a sophisticated and careful analysis of one of the more difficult copyright doctrines. The case applied copyright separability analysis to five designs on cheerleading uniforms—eg, the colors, shapes, braids, stripes and chevrons—and granted summary judgment for the defendant in Varsity Brands v. Star Athletica.

Varsity filed sketches with the Copyright Office for three of its designs and described them as two-dimensional artwork. The remaining two registrations were registered as fabric design (artwork) and the deposit was a photograph of a completed uniform incorporating the design. Varsity focused its claims of copyright on certain design features in the primarily stripes and chevrons. Varsity saw its copyrights as designs independent of clothing, yet the stripes and chevrons were common and basic elements of cheerleading uniforms. Star saw the copyrights as functional concepts that were inseparable from the nature of a cheerleading uniform. While sketches and drawings are clearly copyrightable, as prior cases have they cannot be used to control the production of functional items:

The Copyright Act does not protect useful articles, and clothing, such as cheerleading uniforms, are generally considered to be useful articles. However, the Copyright Act does allow for the protection of design elements of clothing, but only when those elements are physically or conceptually separable from the garment itself. Designs on fabric, such as floral patterns, may be protected by copyright. But the design of the shirt, skirt, or dress made of that fabric is not protectable. The design of a useful article is protectable as a pictorial, graphic, and sculptural work only if the design "incorporates pictorial, graphic, or sculptural features that can be identified separately from, and are capable of existing independently of, the utilitarian aspects of the article: 17 USC § 101. This phrase is the genesis of one of the more elusive copyright doctrines: the doctrine of separability.

To decide this cheerleading uniform case, it was necessary to determine if the designs were separable from the garments. "Separability comes in two flavors—physical separability and conceptual separability." If a feature meets either one of the separability tests, it is eligible for copyright protection.

Conceptual separability analysis has at least six different formulations, whose applicability depends on the court and the circuit and, most important, the type of useful article at issue (e.g, clothing, furniture, mannequins, lighting fixtures, etc.). An important point is that even though particular utilitarian objects may be highly pleasing to the eye, "Congress has explicitly refused copyright protection for works of applied art or industrial design which have aesthetic or artistic features that cannot be identified separately from the useful article" One formulation for conceptual separability is whether the design elements are independent of functional consideration. Can the design elements of theF useful article for which copyright protection is sought be conceived of independently of their functional nature? For a design element to be conceptually separable, it must be the result of aesthetic decision-making that is independent of functional considerations. Aesthetic decision-making that is even partially dependent on functional considerations is not sufficient to confer copyright protection to design elements of useful articles.

The New York cases, Miya and Jovani—the latter involving a prom dress design—applied conceptual separability analysis to the apparel at issue and that it was not present in either case, with the court in finding the various items do reflect the designer's artistic judgment exercised independently of functional influences Instead, each of the individual elements is plainly fashioned to fit the specific needs of a prom dress. The cloth swatch containing sequins and beads is formed to compose the bust portion of the dress; the ruched satin fabric is shaped into a waistband; and the layers of tulle make up the dress's skirt.'" Similarly, the court in Eliya also found a lack of conceptual separability, but it took a slightly different tack and focused on another function of apparel—to make the person it attractive:

Unlike a fanciful design on the base of a lamp, or the ornamentation on a belt buckle, the features of the SHOE design described by Eliya are not purely aesthetic. Of course, the precise design of the sole, the strap, the border, or the stitching is, to some extent, influenced by artistic considerations. people do not simply wear shoes to protect their feet while walking. Rather, people often wear shoes, at least in part, as an expression of fashion or of their personal taste. With this consideration in mind, the SHOE design clearly reflects various aesthetic decisions that were made to create a desirable, attractive, and marketable shoe.

While Varsity might have applied for and obtained copyright registrations that did not include the depiction of entire garments on cheerleaders or pictures of manufactured uniforms, it did not do so. Nevertheless, Varsity argued that because its designers sketch the uniform designs independent of functional influences, its designs were not conceptually separable from the utilitarian features of the cheerleading uniforms. Star argued that the uniform designs were not conceptually separable for two reasons. First, the stripes and chevrons were necessary to the function of the clothing because they are basic elements of cheerleader uniforms. Second, the stripes and chevrons further the decorative function of clothing to enhance the wearer's attractiveness. Varsity claimed that its designers were not creating garment designs, but were just creating abstract designs unrelated to the use of a garment. Varsity took this position it argued that its designers were exercising their independent judgment, without regard to functionality. This argument was necessary for establishing conceptual separability. 'there was contradictory evidence that the designers intended to create cheerleading uniforms, e.g., sketches of cheerleaders wearing the uniforms at issue. But, of course, it was their job to design cheerleading uniforms for the business. Because of this, the starting point for the designs was to create a uniform that (a) enhances the attractiveness of the wearer and (b) communicates that the wearer is a cheerleader

In an effort to rebut this line of reasoning, Varsity created new products for the litigation. One product was a sublimated fabric. Specifically, a sheet without seams—onto which stripes and chevrons and the solid-color shapes that make up a cheerleading uniform were dyed through a heat transfer process called sublimation. Varsity intended this sublimated to show that printed stripes and chevrons, which did not have a structural function such as concealing and reinforcing a seam, were physically separable and, therefore, protectable by copyright. The second product Varsity created was a monotone uniform with no multi-color stripes or chevrons (i.e., blank shell tops and skirts) to show that its designs were conceptually separable from its cheerleading uniforms (i.e., that the aesthetic decision making that went into its arrangements of color, stripe, and chevron design elements were conceived independently functional considerations).

The district court in Jovani used the Secomi Circuit's two-part test for physical separability with respect to a claim of copyright in cloting-designs. First, the removal of a design element must not harm the functionality of clothing. Second, the design element must also have independent value as art"

In analyzing physical separability, the court in Varsity considered Varsity's newly manufactured fabric sheet with the dyed stripes and chevrons and cheerleading uniform shapes. The court found "[t]lhe fabric evokes the image and concept of a cheerleading uniform and proves the difficulty of the design from the utilitarian article" The court then applied the physical separability test, stating that the lines, patterns, and chevrons from the actual physical garments and placing them on a different canvas did not remove their association as cheerleading uniform components, finding that the stripes and chevrons could not be removed from the uniforms without adversely the function uniforms.

Having found the Varsity designs failed both the conceptual and physical separability tests, the court entered summary judgment to the defendant Star as to claims of copyright infringement

Some copyright cases may lend themselves to a much earlier resolution using a defense based on separability. For example, separability may be raised as an effective defense at the pleading stage on a motion to dismiss, as in Aqua Creations USA Inc. v. Hilton Hotels Corp., involving copyright deposit depicting a lighting fixture. Defendant Hilton moved to dismiss for failure to adequately plead copyright infringement, specifically failure to adequately allege separability in the context of copyright depicting elements of a light fixture. The court found that Aqua Creations to adequately plead both physical separability and conceptual separability. On the subject of conceptual separability, the Aqua court held that conclusory pleadings were inadequate and dismissed the case at the outset, stating: "Aqua has failed to plead what elements of its lighting designs are conceptually separable from the utilitarian aspects of its works." In copyright cases involving copyrights and functional items, separability can be a powerful tool to separate the wheat from the chaff.

The views expressed in this article are personal to the authors and do not necessarily reflect the views of the authors' firms, the State Bar of California, or any colleagues, organization, client.

Antonio R. Sarabia II practices intellectual property law, with emphasis on copyrights, trademarks and licensing, in Rolling Hills Estates with IP Business Law, Inc. He also serves as an expert witness in copyright, trademarks and apparel cases. He can be reached at asarabia@raxxet. 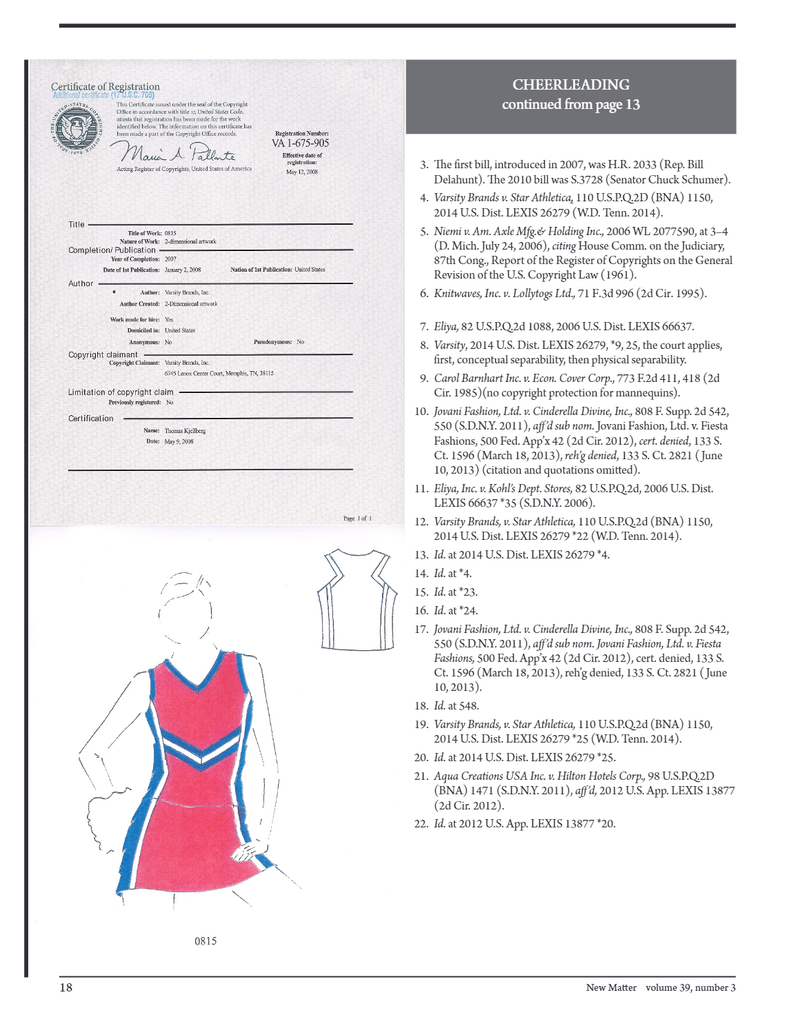